Flossing Before or After Brushing?

Our friends in the dental assistant program at Everest College have put together another graphic about How NOT to Brush Your Teeth. 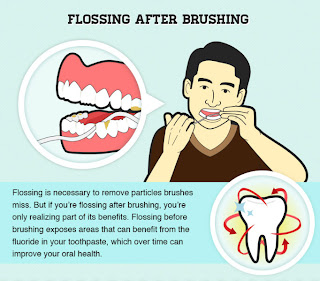 The last item in the list of dental care things NOT to do is "Flossing after Brushing." The text says that this will only bring some of the benefits of flossing, and flossing before brushing will "improve your oral health."

Well, this is a widely discussed topic - in dental offices and on the web. Personally, the logic of cleaning away the big particles with floss and using the brush to clean the uncovered surfaces seems reasonable to me. But the broader view of "You just floss any time you want," will probably be adequate to promote dental health and prevent anyone from feeling like they're flossing wrong.

Consider that most studies suggest that only a small fraction of people actually floss with any regularity. And, as discussed earlier, proving the effectiveness of flossing is as difficult as proving the specific effects of any behavior in slow onset conditions like tooth decay and gum disease.

So, let's say you should floss. If the "get the big stuff & brush clean-up" idea appeals to you, floss before brushing. Floss after brushing - which will eventually be followed by more brushing - and you'll still get cleaning in those tough places between teeth!

BTW: The graphic assembled by the future dental assistants at Everest College mentions certain brushing angles and patterns that should be avoided. If anyone is looking for a challenge when brushing and wants to introduce some new cleaning angles into their brushing routine - try holding your brush with your other hand while you clean your teeth.  It's tough, but it will probably clean some new spots.