A couple of years ago we broke an exclusive story about floss on Mars -
Floss was found on a wheel of the Mars Rover!
Now we've found a scene from the upcoming sequel to The Martian
(Sure they'll be a sequel - it will be like the sequel to Home Alone, crossed with a (dreaded) sequel to Interstellar (Let that guy rest!).

Matt Damon, again stuck on Mars, meets a Martian and they bond through shared flossing experiences.
Here's a still from the sequel: 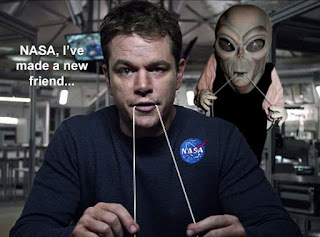 Floss on! And Happy Halloween from the National Flossing Council!

Posted by Armand L at 7:00 AM No comments: Links to this post

A Clever Line of Floss Ads

Oral B has a new ad series with comic characters drawn in floss silhouettes. 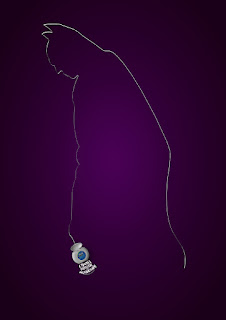 Posted by Armand L at 6:34 PM No comments: Links to this post