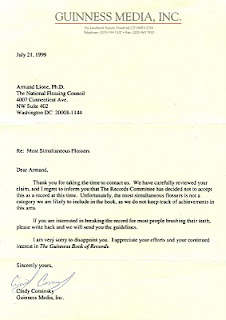 A few months ago, there was a news article about elementary school children who had supposedly set the Guinness World Record for the most flossers on a single string.

The gimmick of the record didn’t catch my attention (Floss isn’t so costly that it often needs sharing – and who can do any agile flossing with a neighbor so close?) The suggestion that the Guinness Record people were involved did catch my eye.

About 10 years ago, preparing for the first National Flossing Day, I asked the people at Guinness World Records (http://www.guinnessworldrecords.com/) about setting the record for the most simultaneous flossers. As you can read in their response, they wouldn’t authorize a flossing record. Brushing records seemed ok – but no flossing.

Had Guinness Records changed their tune?

Looking into the Guinness web site and some of their books, there was no sign of any floss/flossing records that they had approved.

Closer inspection of the kid’s flossing record eventually revealed that it was authorized not by Guinness, but rather the newcomer: “Universal Record Data Base” (URDB.org).

The URDB is a pop group, based in NYC, with a web site and a flare for publicity.

In contrast with the Guinness Records org, the URDB will authorize just about any record.

Here’s a short list of a few I found quickly on their web site:

Fastest Pronunciation Of The Word "Fresh" While Holding A Watermelon

Largest Group To Complete The Wave And Apply Lip Balm


It seems that a lot of people dream of being record setters – and the URDB is willing to indulge just about every last one of them.

If anyone finds that Guinness really has authorized a flossing record – please send word.

If you read about a URDB floss record – no need to rush and tell anyone.
Posted by Armand L at 12:59 PM